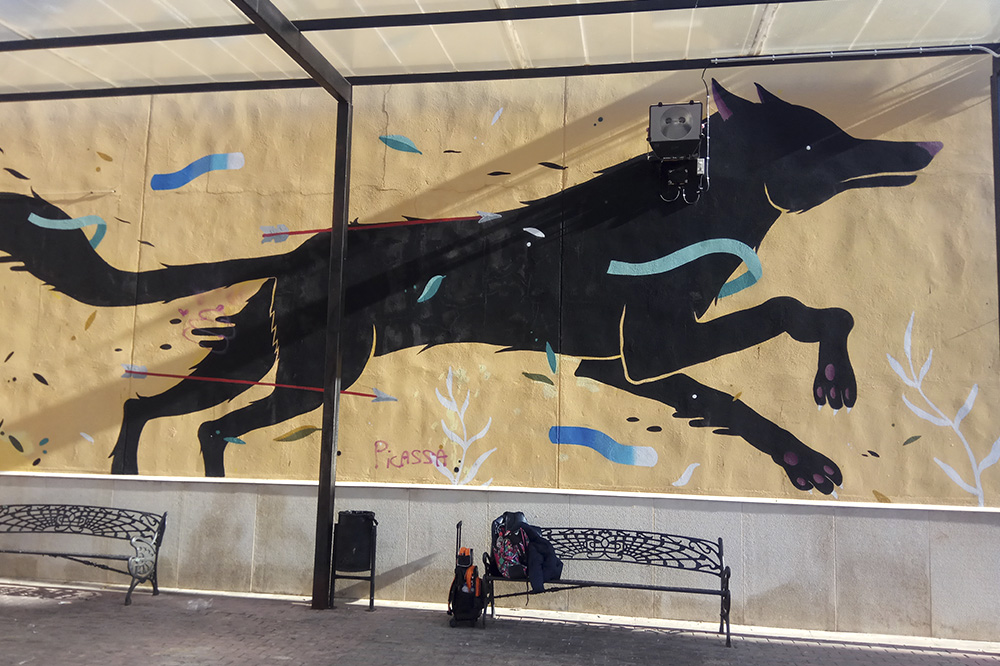 THIS MURAL SUFFERED IRREPARABLE DESPERFECTS, SO IT WAS REPLACED IN THE 2019 EDITION

In order to promote the festival, the organization put in touch with two artists with prestige.

At Graffitea Cheste 2016 we were lucky to be able to tell with Sabek and E1000 two national artists with a wide tour and both national and international prestige that they reside nowadays in the Spanish capital.

SABEK, an artist that comes from the graffiti. The speak is a multidisciplinary artist that in spite of having a line of creation related to the urban art and the murals of great format.

The work of this artist can be divided into two aspects: the color and the relation to the nature. First the color stands out for the use of the black without outlining for the accomplishment of the protagonists of his scenes, with the figure of the wolf, the raven, the tiger, the serpent or the bear.

Powerful figures who have a great presence strongly social connotation in any culture well is in their presence, force or trickery.The size of his prominent figures makes that the interventions of this artist are very striking.

E1000. This resident artist in Madrid, comes from the scene of graffiti of Madrid. A work recognized principally by two very differentiated forms of working.

The first is small interventions that he realizes in street furniture revising the bosses and forms of frames, doors, windows, gratings, sewers and an infinity of elements t. His another line of work is the representation of a chromatic range that repeats again and again and that we can recognize like a work from him for the chromatic scale. E1000 use this chromatic range in each of his interventions to realize geometric forms that generally play with the space where they are located, contributing dynamism and filling the spaces of color.